It exposes an alleged Problem-Reaction-Solution chemical attack in Syria that would be blamed on President Assad to justify military action against him and his regime.

Visitors to this website know that this is happening all the time and 9/11 was the most famous example, but here was a British national newspaper publishing the story.

Now it has gone. Do you think you could explain why Daily Mail? If there was a denial as there would have to be why is that not simply printed with the original story? 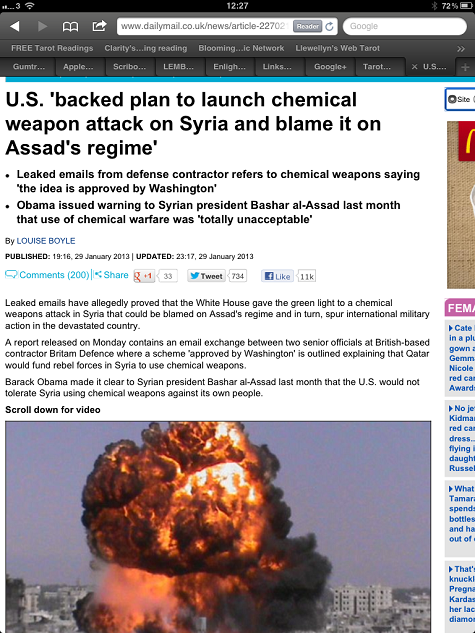 This image of the article was captured by Dr Manjir Samanta-Laughton who read the story and thought that it may well disappear given the content. She was right.

This was the original Daily Mail link for the article: http://www.dailymail.co.uk/news/article-2270219/U-S-planned-launch-chemical-weapon-attack-Syria-blame-Assad.html

Syria is not a war caused by 'rebels' within the country just as the Libya 'revolution' was not. They are part of a systematic fake 'Arab Spring' takeover of the whole of Africa and the Middle and Near East by forces working through the United States, Israel and NATO (all the same thing if you go high enough or deep enough). I have been exposing this plan in my books for years and what is now happening in Mali and planned for country after country in Africa orchestrated through the US AFRICOM network is all part of this. Watch out South Africa because they want you, too. They want everything because they are insane.

They manufacture a different excuse for each new country although with Libya and Syria it was exactly the same. 'Rebels' funded and armed by the US and NATO (via Qatar) start attacking government targets and when the government returns fire the forces behind the 'rebels' scream through their compliant and ignorant media 'Gadhafi/Assad is killing his own people'. They then use this 'humanitarian' excuse to send the boys in to slaughter the innocent and steal oil reserves and other assets.

They did this in Libya and they have been desperate to do this in Syria but it has not been as easy as they thought and so they planned to covertly arrange a chemical attack so they could say 'we have to send in NATO to stop Assad killing his own people with chemical weapons'.

No wonder the Daily Mail article has been removed so quickly. When their game is exposed they lose their cover stories. 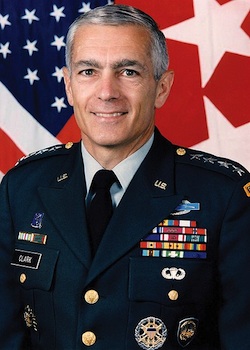 … Clarke said that he was told immediately after 9/11 of a ‘coup’ being plotted by Dick Cheney, Donald Rumsfeld, Paul Wolfowitz and what he called ‘a half dozen other collaborators from the [Neocon/Rothschild Zionist] Project for the New American Century’ which included an invasion of Iraq.

Six weeks later, Clarke said that he saw the same officer, and asked: ‘Why haven’t we attacked Iraq? Are we still going to attack Iraq?’ He said: ‘Sir, it’s worse than that.’ Clarke said the officer told him:

‘I just got this memo from the Secretary of Defense’s office. It says we’re going to attack and destroy the governments in seven countries in five years – we’re going to start with Iraq, and then we’re going to move to Syria, Lebanon, Libya, Somalia, Sudan and Iran.’

Clark said the aim of this plot was: ‘They wanted us to destabilize the Middle East, turn it upside down, make it under our control.’

That is what the fake 'Arab Spring' is all about and the unfolding military conquest of Africa.

... And By The Way, This Pair of Professional Liars and Mass Killers Know Exactly What They Are Doing ... 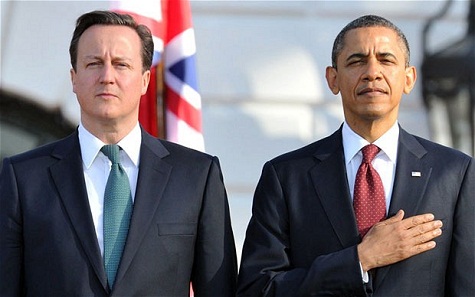 'The free world must stand square together with the people of Libya/Syria/Mali/Yemen ... we cannot stand by while this regime/Islamic extremism kills innocent civilians (that's our job).' 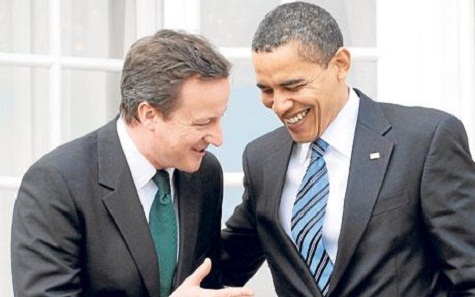 'That was so great, Barack, and you managed to say it without laughing.' 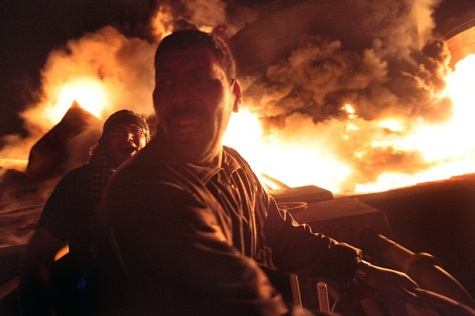 Obama, Cameron, Clinton (and her cover-story 'husband'), Hague, Bush, Cheney, Blair ... war criminals the lot of them. So where are e police?

Arresting an umella in Parliament Square.

Syria, Under the Banner of 'Democratization': Shipping Weapons to Al Nusra Terrorists, Encouraging the Establishment of Sharia Law

THE LAND OF THE FREE

[IF YOU HAVE FAMILY OR FRIENDS  IN THE USA YOU NEED TO BE CONCERNED FOR THEIR SAFETY-MANY AMERICAN TROOPS AND POLICE ARE ALARMED AT THEIR ORDERS WHICH ARE REMINISCENT OF STALIN'S ERA AND NAZI GERMANY.]

HOW GEORGE OSBORNE'S CITY OF LONDON BANKSTERS CONTROL THE WORLD.

President Obama Is A Mercenary For Private, International Banksters And The Treasonous Oligarchy

THE COMPLETE IDIOT'S GUIDE TO THE NEW WORLD ORDER

FIND OUT NOW WHILE YOU CAN!

The Globalists Plan for a Coming World Currency

LOU DOBBS SACKED BY CNN FOR TELLING THE TRUTH TO THE AMERICAN PEOPLE- : ELITES ARE SETTING UP A -  ONE WORLD ORDER -1/2

Conspiracy: Who Are the Bilderberg Group? by YOU TUBE

www.conspiracyrealitytv.com- The TRUTH about the City of London and its CONTROL of the FINANCIAL affairs by the ROTHCHILD'S and OTHERS!

Will ED. & David Miliband or -ED Balls or David Cameron -Kenneth Clarke or George Osborne and their many Bilderberg colleagues in the HOUSE